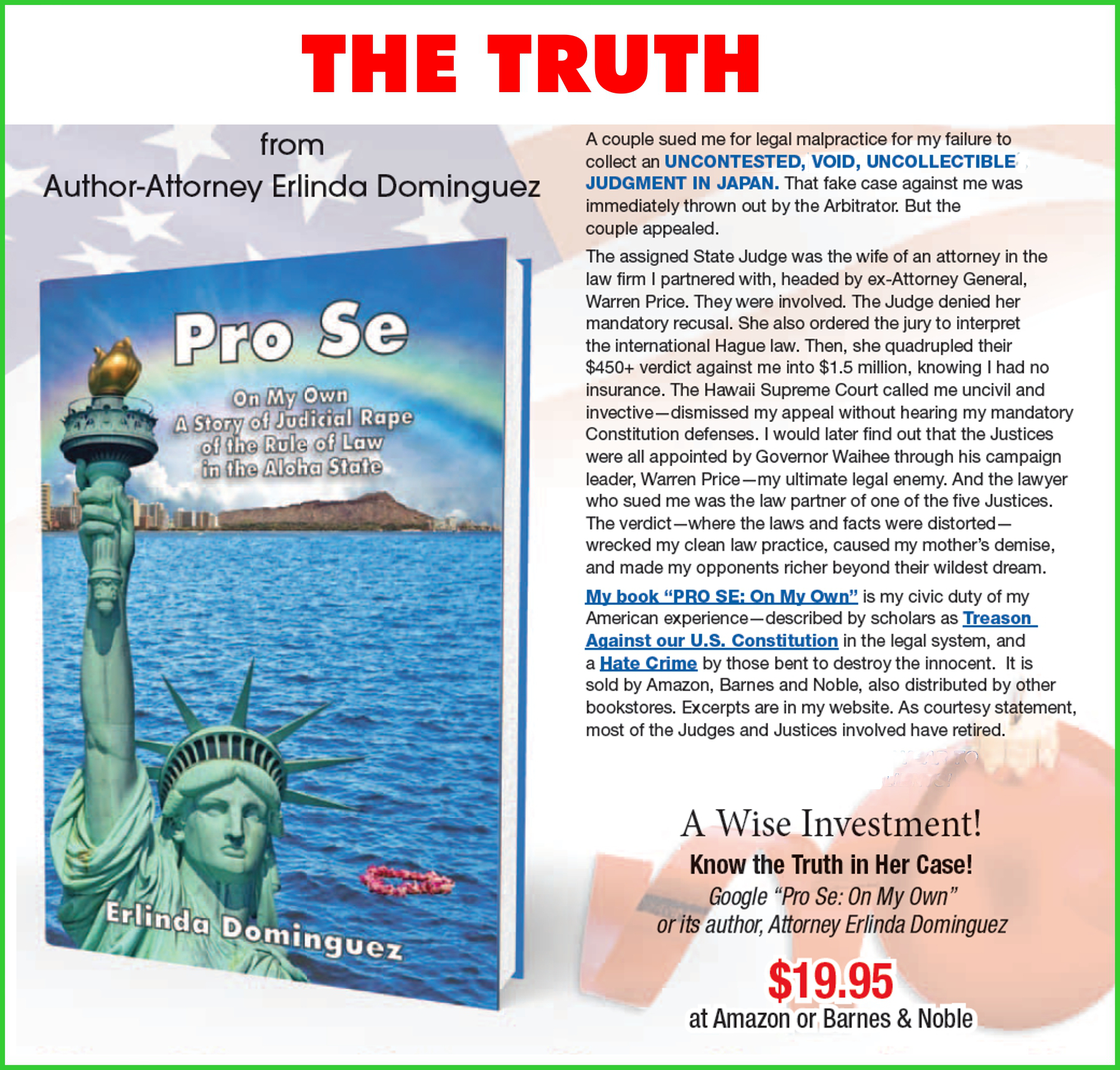 A horrifying true story of unconscionable conflicts of interest, betrayals, abuses, ineptitude, ultimate fraud and cover-up — when American dream clashed with American greed as played out with impunity in the judicial system. A blockbuster source of truth and awareness for all who care for justice.

Letter to Hawaii Commission regarding its request for suggestions:

I suggest: (1) There should be a written form detailing intense feelings, relationship of the Judges and Justices and family members with the parties and their attorneys, signed under oath respectively, and any recusal should not be heard before the Judge or Justice involved; (2) The ODC must always name and disclose the accuser or complainant; Should have no arbitrary internal procedure, and no confidentiality that hides what they do; (3) Nothing should be written on a Court text demeaning the lawyer without the lawyer’s knowledge. (An Island Judge described me as ‘in all her shining glory’ after I was minutes late due to airport error); (4) Older Judges should be regularly tested for mental stability and capacity because people age differently. (Same Judge sanctioned me for what he, alone, was seeing in his courtroom— that a lawyer was flying from her chair (me) or making flying motions during a jury trial — disproven by the audience, Court videos, and scientific impossibility).

In a civil suit against me and my office, the trial Judge was married to an attorney whose law firm I sued on the same issues. That Judge claimed that my attorneys waived her spousal conflict. But nowhere in the Court records and notes of all the lawyers involved was there such a disclosure and waiver. I reported her to the Judicial Commission and to the ODC who both dismissed my complaints. Later, I reported my lawyers to the ODC for their ex-parte withdrawal without my notice. My complaint was quickly rejected. However, when I was reported, that Office investigated, and refused to name my accuser(s) nor contact my witnesses.

In my appeal in the civil suit mentioned above, I was pro se with researchers and brief preparers. Rightfully, we were intensely legal. However, the Court thought that my arguments were uncivil and invective even if they were textbook terms. My appeal was dismissed on form. Thereafter, I found out that the attorney who sued me was the business and law partner of one Appeal Justice before that Justice was appointed to the Court. The above is a small part of my experiences.

The problem is much, much, much deeper and more serious than any inadequacy of the rules. It involves human morality, competence, courage, or lack thereof. It begs the issue of respectability, professionalism, dignity, truth, the Rule of Law in the profession. An effective and quick solution? I have no idea.

I am grateful–
To the Honorable Federal Judge Barry M. Kurren in Hawaii who saw the truth and applied the law; to the Arbitrator Walter Davis who said, “I will do the legal and moral thing, or I have no business sitting here.” His decision vindicated me from any legal malpractice, but he didn’t live to know what my opponents did thereafter;

To the California State Judge and the lawyers in his court when I was summoned for a jury selection. Their reaction of sheer disbelief of the conflicts of interest and ultimate injustice that I personally experienced in the Hawaii courts also inspired me to write this book;

To my many clients for whom I was pleased to be of service, friends and relatives, acquaintances and the supporters of the Rule of Law—with my special affection to the group who read my manuscript then encouraged me to publish this book—to make people aware of what could happen to a litigant in a Court of Law;

To everyone who read my first book, Twice Upon a Court, then took the time to positively comment in their own way;

To the readers who will find this book extremely educational and see the truth that it reveals—too morbid, horrifying, immoral, hurtful it may be;

To our military men and women who unselfishly sacrifice their lives for our freedom, and to those who now live in the eternal history of heroes;

To all who peacefully fight for what is just and right—regardless of their color, nationality, creed, personal circumstances—even with fear of reprisal by the all-powerful;

To each one who shares the American dream—that it is a fact, everyone is born equal—and our United States Constitution that guarantees our inalienable right of freedom—should always be respected, defended and upheld. 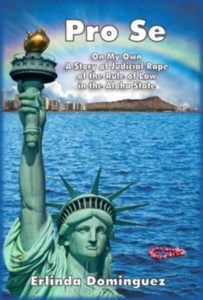 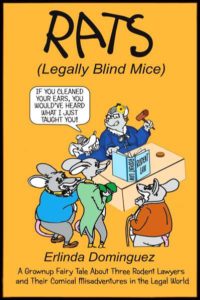 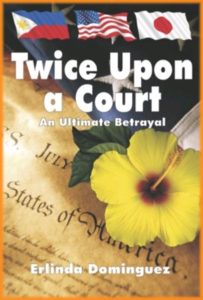 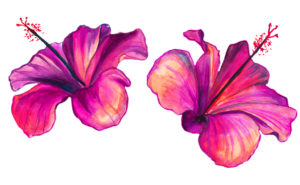 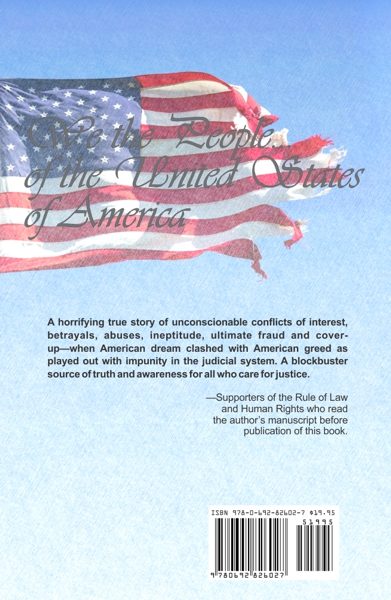 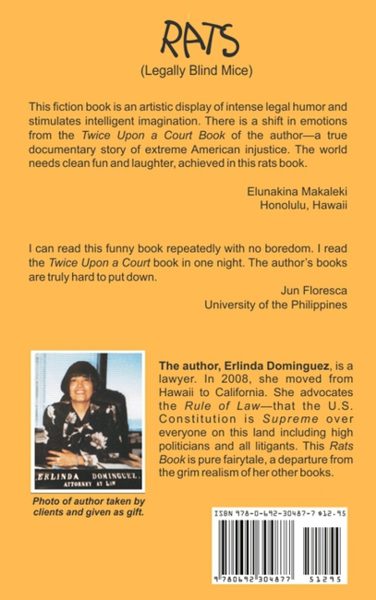 Twice Upon a Court 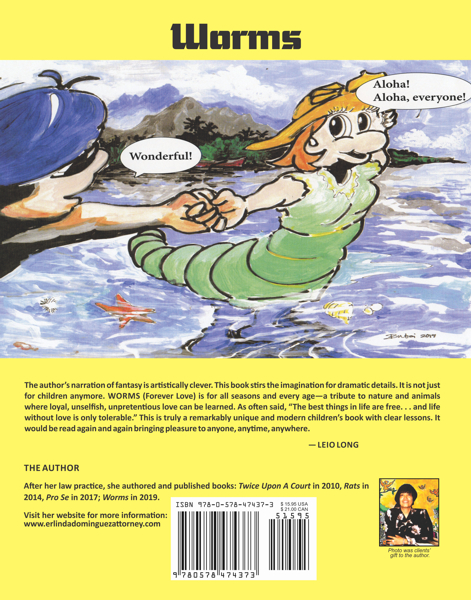 —to the readers of this book who would be transported to the enchanting world of innocence; and to all children and the young at heart wherever they may be.
—to all my clients and friends, some read my short stories many years ago and still remember them with delight.
—to my special group in Hawaii who always sang Kanaka Waiwai  that carried the spirit of love and truth, by composer John Kameaaloha Almeida.
—to my unforgettable friends in the Philippines who believed in the lyrics of Faithful friends are life’s best treasure, wealth and fame may pass away.
—to friend Erun Dey and her club members who preserved copies of my short stories when no one thought they could be published books someday.
—to Sr. Corazon J. Salazar, MQHM, who promotes underprivileged children’s education and encouraged publication of this book.
—to artist Lino Gilbert K. Parone who sketched all the illustrations on very short notice.