Excerpts from
Pro Se On My Own, A Story of Judicial Rape
of the Rule of Law in the Aloha State 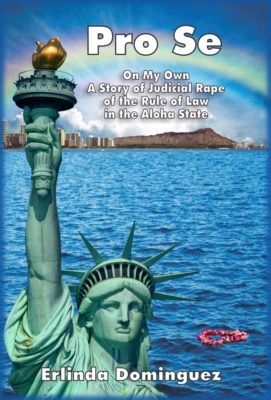 “I think that the appeal judges discussed, decided, and then instructed their clerks to draft their decision. The clerks exaggerated with too many distortions, additions, subtractions of the facts and the laws. It would have been better for them if they were simpler.”

Judge Alexa Fujise of the Hawaii Court of Appeals, who signed the Pohl appeal decision, was the wife of Francis Yamashita with whom she had previously shared a small law office... In the words of Harvey, “He just does not like you, Erlinda. He said so in no uncertain terms.

I had come to believe that in that aloha state, a judge could preside in a case through arbitrary choice discussed behind closed doors. No guidelines. No screening. No accountability. And the community would remain ignorant and complacent.

I contacted Professor Jon Van Dyke of the University of Hawaii who taught the Constitution.
He didn’t know me but he was familiar with my case. Roy Chang had been consulting with him.

Friends insisted, “Do something. Will you just forgive what your lawyers Roy Chang and Harvey did to you? They can walk away with their fatal mistakes and ultimate betrayal like a glorified vicious murder?”

Attorneys William McCorriston and Kenneth Mansfield were already in the courtroom.

My lawsuit was not late, dismissal was denied, and a jury trial was ordered.

The proceeding was over. I looked at Judge Kurren with a silent message. “Thank you, Your Honor, for your competence and morality. Hawaii needs more judges like you. Good luck to this beautiful island!”

Something was happening. It couldn’t be right. My lawsuit was pulled away from Judge Kurren and found its way to another federal judge—Susan Oki Mollway.

In a few minutes, Judge Mollway entered her court and the proceedings began. She wanted to discuss her written unofficial decision.

Kenneth Mansfield appeared to know that I never saw a copy. And Judge Mollway seemed unaware that I was no longer in active practice in Hawaii, had no electronic service, and was travelling from California. But her lack of knowledge should not happen.

Courts were organized and fully staffed.

My malpractice opponents had the same style—complete silence. They ignored my issue of alien versus alien that made the federal judgment uncollectible. Then the Hawaii Supreme Court decision likewise completely ignored that Constitution issue—not a word was said when my appeal was dismissed! Thus, there was nothing worthy of review by the U.S. Supreme Court.

That gimmick came in handy for some astute or cunning practicing lawyers. It could be discreetly done through intense technical words—their final way of prevailing, a severe method of injustice that would be the final blow to completely annihilate in silence an appellant’s fundamental rights. The death of the constitution.

The public, and most lawyers wouldn’t know. It was extremely, extremely rare. Such an ugly tool was not taught in this great country. Not even in foreign law schools where I learned the profession. To the legal world, it was so unfair, immoral, underhanded, extremely unethical, unjust, and an ultimate deliberately hidden betrayal of the U.S. Constitution.

I wanted to scream, “Honorable Appeal Judges, my opening brief is saturated with the issue of representation rule, from page one to the last page, 35. The volumes of court transcripts and records are bursting with that main issue. I was not crazy to waste time and money only to forget and overlook my major reason to appeal. It was Judge Mollway’s decision and my opponents who were silent. I know why.”

I felt the overwhelming injustice. Especially when my destruction began in the court of Judge Victoria Marks who was the wife of the recent Hawaii State Attorney General Robert Marks—a partner of the Pohl law firm that I had sued. And I would find out after everything was over that Supreme Court Justice Steven Levinson who dismissed my appeal, was the business and law partner of Francis T. O’Brien, the main attorney who sued me to collect a federal void judgment— by then almost quadrupled by the judge, Mrs. Marks!

But something strange was happening. It was pleasantly surprising. I began receiving letters from attorneys throughout the United States. They were offering to help.

Help me? Wow! I was becoming infamous nationwide.

Before I could verbalize that further thought, the California judge softly murmured, “I could not believe this…this is unbelievable…”

Sounding concerned and judicious, the judge asked, “Don’t they follow the same rules we do? There are ethical rules to be followed, rules that are traditional and historical in this country.”

“Your Honor, it happened in Hawaii. It did not happen here in California,” I quickly added.